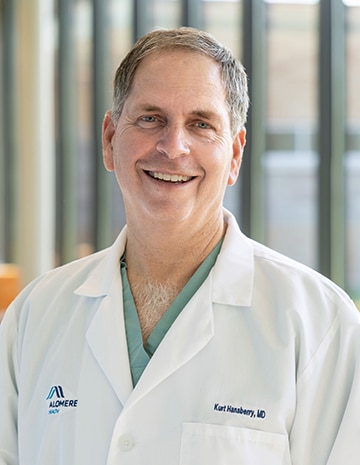 Dr. Kurt Hansberry was born in a military hospital in Panama. He traveled extensively throughout the southwestern United States while his father was serving in the United States Army. He received his M.D. Degree from the University of Oklahoma College of Medicine in 1983. He completed his Categorical Surgical Internship at William Beaumont Army Medical Center in 1984 while serving on active duty with the United States Army. Dr. Hansberry then directed a troop medical clinic in Korea for one year prior to doing his residency in Urology from 1985 to 1990 at Brooke Army Medical Center. After completing his residency, he was on the teaching faculty and was Assistant Chief of Urology at Madigan Army Medical Center in Tacoma, WA. He obtained his board certification from the American Board of Urology in 1992 and recertification in 2002. He is a member of the American Urological Association, American Association of Clinical Urologists and Society of Government Service Urologists.

Dr. Hansberry joined the Alexandria Clinic in July 1996. He and his wife, Kathy, and family reside in Alexandria. He enjoys family activities, running and especially golf.